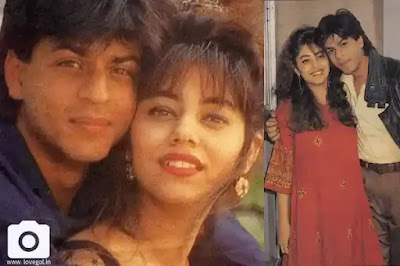 Shah Rukh Khan and Gauri Khan will not be wrong to say the ideal couple of Bollywood. Do you know Shah Rukh's first crush in life is Gauri Khan!  Yes, 18-year-old Shahrukh fell in love with 14-year-old Gauri. We know a little about their love story but let's get to know a little bit about it. Shahrukh Khan was 18 and Gauri was 14 when they met at Panchsheela Club in Delhi. First they become friends and then it turns into love.
Shahrukh likes him at first sight. On the first date they both were very scared and the story did not last for 5 to 7 minutes. In the early days of Shahrukh's career, they tied the knot on October 25, 1991. This star couple has been happily married for more than three decades.

On Rajat Sharma's 'Aap Ki Adalat' show, Shah Rukh Khan revealed several unknown aspects of his love story. He clearly said, seeing Gauri, he felt, 'I want this girl'. He also tells her that Gauri is the first girl in his life who spoke to him for more than three seconds. At that time, Shah Rukh was impressed with Gauri's love and decided to stay with this girl forever.
Watch the video above where a viewer on Rajat Sharma's show questions Shah Rukh about the hero's first crush. In response, the actor said, 'My first crush was Gauri'. He was 14 and I was 18. I saw him at a party in Delhi. She was the first girl who talked to me for three seconds. I was impressed by this behavior. There is a saying in Punjabi, Iha kudi Leni hai (I want this girl).
In 1992, an article in Stardust magazine was published, in which Shah Rukh stated that Gauri was present throughout his life. He can even give up his acting career for Gauri. Shahrukh said, 'For me my wife comes first..If someone ever asked me to choose between Gauri and my career, I would choose Gauri without thinking for a minute. Gauri is everything to me.
They are currently the happiest couple of Bollywood. Although they have faced various problems in the past, they have survived by clinging to each other. Gauri held Shahrukh's hand tightly despite knowing that the future was uncertain. There was a lot of social gap between the two, there was also a difference in religion but nothing stood in the way of this relationship. The two did not let any kind of gossip become a wall between their relationship.
Next Post
No Comment
Add Comment
comment url
Celebrity-News