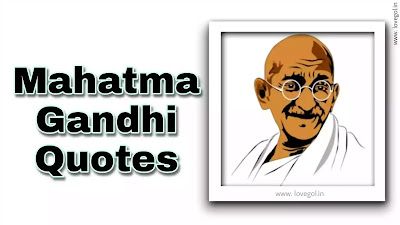 In the history of the world, including India, there have been some people who have radically changed human civilization and thinking through their ideologies and activities, which have played a unique role in the development of society and civilization. One of these people was Mahatma Gandhi. In the interest of the country, the man left his court-pants and wore khadi dhoti-chadar all over the country. The only goal is the independence of the country. But not on the path of violence, Gandhiji proved that freedom can be achieved through non-violence and satyagraha.
Mahatma Gandhi was an Indian freedom fighter. He fought hard to give freedom to the country. His full name is Mohandas Karamchand Gandhi. He received the title of Father of the Nation. I hope these quotes of Gandhiji will light the lamp of hope in your mind.

“If we could change ourselves, the tendencies in the world would also change. As a man changes his own nature, so does the attitude of the world change towards him. We need not wait to see what others do.” – Mahatma Gandhi

“A man is but a product of his thoughts. What he thinks he becomes.” – Mahatma Gandhi

“I will not let anyone walk through my mind with their dirty feet.” – Mahatma Gandhi

“Happiness is when what you think, what you say, and what you do are in harmony.” – Mahatma Gandhi

“Nobody can hurt me without my permission.” – Mahatma Gandhi

“The weak can never forgive. Forgiveness is an attribute of the strong.” – Mahatma Gandhi

“Nonviolence is a weapon of the strong.” – Mahatma Gandhi

“My religion is based on truth and non-violence. Truth is my God. Non-violence is the means of realising Him.” – Mahatma Gandhi

“Freedom is not worth having if it does not include the freedom to make mistakes.” – Mahatma Gandhi

“An ounce of practice is worth a thousand words.” – Mahatma Gandhi 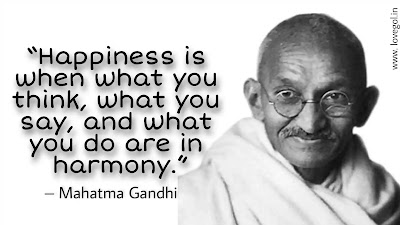 “A coward is incapable of exhibiting love; it is the prerogative of the brave.” – Mahatma Gandhi

“The best way to find yourself is to lose yourself in the service of others.” – Mahatma Gandhi

“Service which is rendered without joy helps neither the servant nor the served.” – Mahatma Gandhi

“If we are to teach real peace in this world, and if we are to carry on a real war against war, we shall have to begin with the children.” – Mahatma Gandhi

“An error does not become truth by reason of multiplied propagation, nor does truth become error because nobody sees it.Truth stands, even if there be no public support. It is self sustained.”

“Nearly everything you do is of no importance, but it is important that you do it.”

“In a gentle way, you can shake the world.”

“If I have the belief that I can do it, I shall surely acquire the capacity to do it even if I may not have it at the beginning.”

“All the religions of the world, while they may differ in other respects, unitedly proclaim that nothing lives in this world but Truth.” 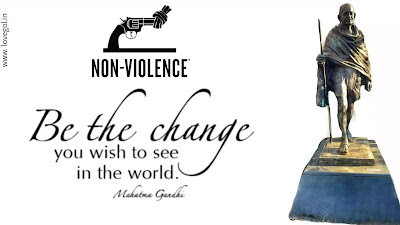 “Hate the sin, love the sinner.”

“Glory lies in the attempt to reach one’s goal and not in reaching it.”

“We may never be strong enough to be entirely nonviolent in thought, word and deed. But we must keep nonviolence as our goal and make strong progress towards it.”

“Whenever you are confronted with an opponent, conquer him with love.”

“Power is of two kinds. One is obtained by the fear of punishment and the other by acts of love. Power based on love is a thousand times more effective and permanent then the one derived from fear of punishment.”

“To call woman the weaker sex is a libel; it is man's injustice to woman. If by strength is meant moral power, then woman is immeasurably man’s superior”

“Permanent good can never be the outcome of untruth and violence.”

“The future depends on what you do today.”

“To give pleasure to a single heart by a single act is better than a thousand heads bowing in prayer.” 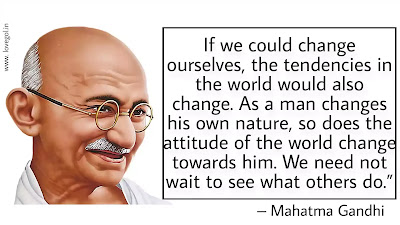 “Strength does not come from physical capacity. It comes from an indomitable will.”

“It is unwise to be too sure of one's own wisdom. It is healthy to be reminded that the strongest might weaken and the wisest might err.”

“You don’t know who is important to you until you actually lose them.”

“Change yourself – you are in control.”

“I object to violence because when it appears to do good, the good is only temporary; the evil it does is permanent.”

“Freedom is not worth having if it does not include the freedom to make mistakes.”

“You may never know what results come of your actions, but if you do nothing, there will be no results.”

“It is better to be violent, if there is violence in our hearts, than to put on the cloak of nonviolence to cover impotence.”

“I cannot conceive of a greater loss than the loss of one’s self-respect.”

"Literacy in itself is no education. Literacy is not the end of education or even the beginning. By education I mean an all-round drawing out of the best in the child and man-body, mind and spirit."

“You must not lose faith in humanity. Humanity is like an ocean; if a few drops of the ocean are dirty, the ocean does not become dirty.”

"True education must correspond to the surrounding circumstances or it is not a healthy growth."

"What is really needed to make democracy function is not knowledge of facts, but right education."

“Purity of personal life is the one indispensable condition for building up a sound education.”

“An education which does not teach us to discriminate between good and bad, to assimilate the one and eschew the other, is a misnomer”

"You must be the change you wish to see in the world."

“A teacher who establishes rapport with the taught, becomes one with them, learns more from them than he teaches them. He who learns nothing from his disciples is, in my opinion, worthless. Whenever I talk with someone I learn from him. I take from him more than I give him.”

“A balanced intellect presupposes a harmonious growth of body, mind and soul.”

“By spiritual training I mean education of the heart.”